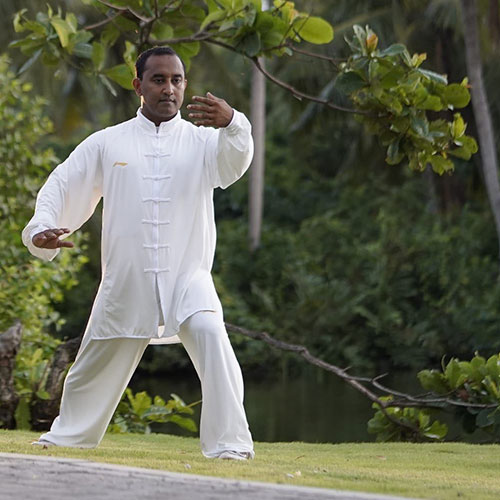 Movements of Qi Gong exercises are mainly featured with gentle, slow, smooth, continuous, moderate
in tension, well-balanced between stillness and motion, well-coordinated between spirit and form, and
well-combined with Qi. Through the bending, stretching, stooping, and pitching movements of the limbs
and trunk and the ascending, descending, opening, and closing movements of internal Qi activity, all
tendons and muscles of the body can be stretched and extended and the channels can be unblocked to
achieve “straight bones, lithe tendons, and smooth blood and Qi circulation”.

Tai Chi Chuan is a body and mind fitness regimen guided by Ancient Chinese wisdom – Yin and Yang, and
Five Elements principles. It belongs to Chinese internal Martial Arts and has been practiced since 17th
century. . It is practiced today primarily for its health benefits, stress relief, and relaxation, although
interest in the martial application of the art is growing. The slow, continuous movements are designed
to impart powerful physical skills and to stimulate the flow of energy within the body, with the ultimate
goal of improved mind-body connection, and increased longevity. Tai Chi Chuan is excellent for health
and balance while preserving its martial aspects which are learned through practice of the empty hand
forms, weapon forms, push hands, fighting forms and free-form sparring.